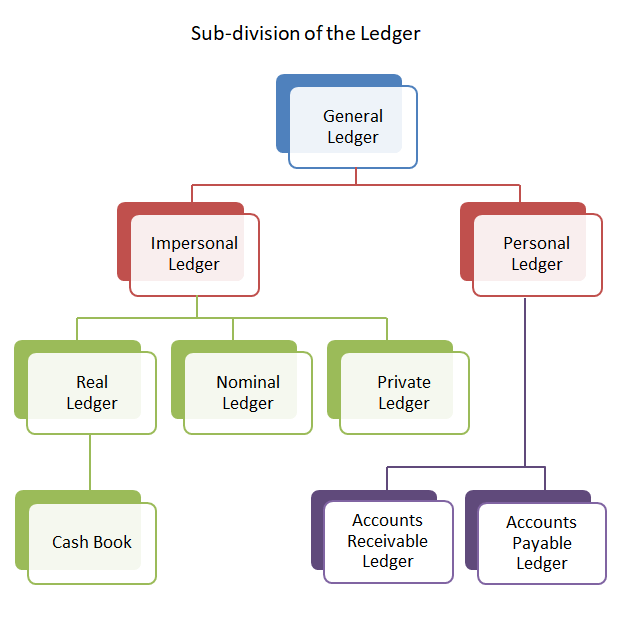 What are Subsidiary Ledgers?

When a business has only a small number of accounting transactions and accounting staff then the double entry bookkeeping postings can all be maintained in a single ledger known as the general ledger.

The sub-division of the ledger into subsidiary ledgers is summarized in the diagram below.

The real ledger contains accounts relating to assets and liabilities. It should be noted that although accounts receivable and accounts payable are real accounts they are also personal accounts and therefore held in the personal ledger.

Cash is also an asset account in the real ledger but due to the level of detail required in the cash account it is normal for a business to maintain a separate subsidiary ledger known as the cash book.

The private ledger contains accounts relating to the management and ownership of the business, including the personal accounts of owners. As the name implies it is used to maintain the privacy of the individuals involved.

The personal ledger records transactions relating to persons such as a customer or a supplier. It should be noted that the personal ledger is not used for the capital and current accounts of the owners, these are maintained in the private ledger referred to above.

Customer personal accounts, sometimes referred to as the accounts receivable subsidiary ledger, and used to record amounts outstanding from customers for on account sales.

Supplier personal accounts, sometimes referred to as the accounts payable subsidiary ledger, and used to record amounts owed to suppliers for account purchases.

Our general ledger sheet template is available to create a ledger sheet for each account in the double entry bookkeeping system.